As a marketing representative and sales professional, understanding the prospective customers and where they get their information before making a buying decision and what factors help in influencing those decisions is always and very crucial. To help shed some light on how the purchase decision-making has changed over the past century, we would tackle the article below.

When it comes to identifying cultural trends from the past century. we often focus our attention on what people were buying. What types of clothing. What types of music. What types of food. But there’s another side to this consumer story that‘s easy to overlook: How were people buying? Where were they getting the information they needed to make informed purchase decisions’?

A SIMPLER TIME
Newspapers, magazines, billboards and other printed advertisements dominated the retail industry Product discovery was relatively organic, as shoppers passed new goods in stores or noticed ads throughout their daily activities. The Sears Roebuck and Montgomery Ward extensive mall-order catalogs enabled consumers to order anything from buttons to materials for building homes.

THE RISE OF RADIO ADS

The transition from written to spoken news and entertainment threw the marketing world a curve ball. Audible advertisements for seemingly every product imaginable for this average U S emerged during “commercial breaks” in radio programming.

In 1929 saw the ‘Black Tuesday‘ stock market crash trigger the Great Depression. which wiped out Americans‘ savings. At the start of the 1930s. 12 million American households owned radios. By 1939, that figure had jumped to more than 28 million.

During World War ll. Americans were asked to be conservative with purchasing products (such as gasoline, steel, rubber, coffee
butter, oil, and meat) to prevent shortages.

Unemployment averaged nearly  18% between 1935 and 1939, America’s entry into World War ll in 1941 ushered
the end of the great Depression.

THE RISE OF TV ADS
Television reached critical mass in the mid-195os. when TVs penetrated more than half of U.S homes. This helped give rise to the ‘Mad Men‘ era of advertising, and automobiles became the great American status symbol.

The Diner’s Club card (an early version of the credit card) was invented in 1949. Enabling customers to dine out while
leaving their wallets at home. Two years later, more than 20.000 people had one.

During the post-World War ll economic boom. families moved mass to new homes in the suburbs. The 1950s turned out to be a heyday for door-to-door sales. as salespeople found success selling to suburban families during the day.

BABY BOOMERS HOLD THE POWER
The 1960s saw an increase in economic prosperity, with disposable income and leisure time at their highest levels ever. After the Vietnam War. Baby Boomers began coming of age, and sought to make changes in everything from social issues to arts to marketing.

TV EXPOSES ALL 1975 – 1985
Fully aware of how to use multiple channels to reach broad consumer audiences. advertisers exposed the average Americans to an estimated 1.600 ads per day during this time. People read ads in their morning papers, heard them on their car radios. watched them on their TVs, and even received them in the mail. By 1976  69 million US homes each had at least one TV. skyrocketing ad spending to $5.9 billion.

INTRODUCING THE PERSONAL COMPUTER
The personal computer industry began in 1977 with the introduction of three preassembled. mass-produced personal
computers: the Apple ll, the TRS-80, and the Commodore Personal Electronic Transactor (PET). These early PCs would help pave the way to giving consumers access to a revolutionary new source of intormation: the Internet,

The Advanced Research Projects Agency Network sent the first~ever spam email to a 400-person recipient list on May 3
1978-promoting a product presentation  for a new line of computers. Decades later. consumers would start using spam
filters to block out these types of unsolicited marketing messages.

NEW TECHNOLOGIES
The 1980s saw the mass adoption of several new technologies that would impact consumer actions. TV remote controls allowed viewers to switch channels  more easily, while VCRs made it possible for viewers to record programming. Both technologies made it easier for consumers to skip over interruptive ads.

Online shopping took off, with eBay and Amazon at the helm. The 1994 launch of Hotwired marked the start ot Internet advertising. For $30,000, sponsors could place ads on the Hotwired website for 12 weeks.

Email and search marketing emerged during this period, as Internet usage surged across the country. It seemed wherever people went on the Internet – even on newly popularized blogs – they’d see product ads.

With mobile devices and social media now ruling consumers’ daily activities, many companies are turning to inbound tactics in order to attract, convert. and close customers. Rather than interrupting people with ads, they’re creating valuable content and making it easy for potential customers to find and engage with them online.

With Thanksto Hubspot.com for this graphic.

Marketing Consultant at Exposure By Design
My goal is to help our clients accomplish fantastic things through online marketing, typically starting with a new website or a website redesign project and evolving into a long term relationship built on increasing leads and sales.
Call us on 0409228554 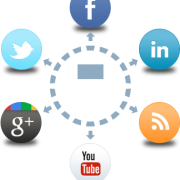 Why Are Infographics So Darn Effective? [Infographic]